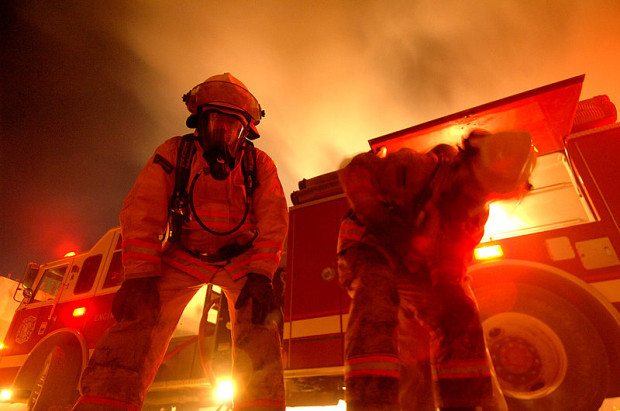 Firefighters are among the real life heroes of the world, so it’s only proper for them to get their due on the silver screen alongside fictional comic-book heroes. If you’re looking into a career in fire service to broaden your opportunities to work as a firefighter or fire investigator, share some of the best firefighter movies with your loved ones so they can get a feel of what it is you hope to do. Let the movies act as a conversation starter with your loved ones concerning your career goals; if you hope to qualify for some of the best firefighting jobs, look into a bachelor’s in fire science program online.

The 1991 Ron Howard thriller “Backdraft” stars Kurt Russell as Lieutenant “Bull” McCaffrey of the Chicago Fire Department and William Baldwin as his brother, Brian, a candidate firefighter. The story focuses on the relationship between the two brothers and how each was affected by the death of their firefighter father before the movie began. Also featuring Robert De Niro as Fire Inspector “Shadow” Rimgale, “Backdraft” may interest those pursuing a degree in investigation. Although a fictional and sometimes inaccurate take on what it’s like to fight fires and the people who start them, “Backdraft” is full of enough drama and tension to keep you glued to the screen.

There have been few real life disasters more devastating to an American firefighter than 9/11, when 343 responding firefighters and paramedics lost their lives, as reported in New York Magazine. Oliver Stone’s 2006 “World Trade Center” was one of the first theatrical re-examinations of that day, and it focuses on the first responders who saved as many people as they could. Nicholas Cage is John McLoughlin and Michael Pena is Will Jimeno, two real-life Port Authority Police Officers who responded that day and who oversaw production of the film. Although the movie can be difficult to watch because it’s based on an actual disaster, it’s a poignant portrayal of the real-life heroes who make saving lives their life’s work.

The 1968 movie “Hellfighters” stars John Wayne, Vera Miles, Katherine Ross and Jim Hutton. Ever the action hero, Wayne’s not a cowboy this time around but an oil well firefighter named Chance Buckman. Miles plays Madelyn, his former wife who couldn’t deal with the dangerous work her husband did so she left him, and Ross plays his daughter Tish, who followed in her mother’s footsteps and married her father’s firefighting playboy partner, Greg Parker (Hutton), just days after meeting him. The movie tells the story of the family’s reconciliation interspersed with the high tension and danger of the job both men love to do.

Although the movie flopped with critics, on Rotten Tomatoes it has a 77 percent approval rating from non-critic users of the site. Some of the drama is campy, but the tension and visual spectacle of the firefighting scenes makes this movie a must-see, as does the portrayal of how spouses and children of firefighters can cope with their fears.

“The Towering Inferno,” a 1974 disaster film, stars Paul Newman and Steve McQueen, some of the greatest action heroes of their day. The film, nominated for Best Picture at the Academy Awards, may trigger reminders of 9/11 during the burning of the fictional San Francisco skyscraper, although the fictional setting might make it more palatable than “World Trade Center.”

Newman is Doug Roberts, an architect responsible for the design of a 138-story skyscraper, the world’s tallest building. McQueen stars as Mike O’Hallorhan, a San Francisco Fire Department chief. Roberts and the building’s electrical engineer argue about the building’s failure to meet safety codes when a small electrical fire breaks out before the skyscraper’s dedication, but the dedication moves forward as planned. During the dedication, the electrical system overloads and starts a fire on the 81st floor, below where many people are gathered, and the SFFD has to swoop in to save lives from this multiple-alarm blaze.

A firefighting movie can inspire you and encourage discussion with your family. How will your family cope with knowing you face danger every day at work? Seeing the dramatic portrayal of firefighters in action might help them understand why it is you want to risk your safety for your job. Although Hollywood is bound to add some overdramatic flair, firefighting movies can remind us the real heroes of the world are far more awe-inspiring than the fictional ones.

The Towering Inferno image by trash world from Flickr.