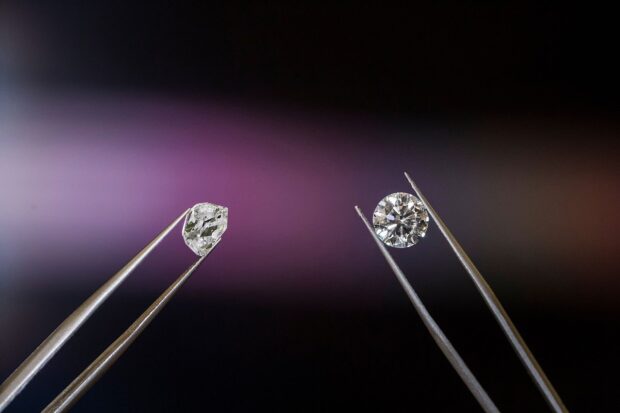 Are Diamonds a Good Investment?

You may have heard the stories about a secret cabal of super-rich businessmen who control the diamond industry, hoarding many thousands of top quality stones to give the false impression that diamonds are a rare and expensive commodity, when in fact they are plentiful and should be cheap – anyone should be able to own a diamond, they claim. This is a little disingenuous, and raises the immediate question as to why many businessmen use diamonds as a hard investment and even sometimes as a de facto currency! They would not do that if there was even the faintest chance that their funds would suddenly plummet in value! So, are diamonds a good investment? Let’s take a look.

While the diamond industry certainly does have authoritarian rules about who can buy and sell the stones, this is to protect the industry, not artificially inflate its worth! Because the difference between a good diamond and a bad one can be so very slight – and even the difference between an average stone and a good fake even more so – it is necessary for each stone to be accounted for with stringent processes followed along the way. If this did not happen, a glut of stones would hit the market – but they would be inferior, only good for industrial purposes, if that, or they would be fakes, or even lab-grown specimens. This would cause the bottom to fall out of the legitimate diamond trade, and not only those careful businessmen, but everyone in the diamond industry from miners to cutters to jewelers and everyone in between, would lose their investment.

Diamonds are ideal contraband! They are intensely portable – a child could carry a million dollars of stones quite easily! They are also very lightweight, so handy for all sorts of transport options including speedy but expensive air travel. And they are valuable. Despite the above-mentioned myth, the quantity of high quality commercial diamonds (as opposed to industrial quality diamonds of which there are considerably more, with an appropriate reduction in value) is actually relatively low. Finding a medium to large stone – five carats or more – is an event for most diamond mines, and even the biggest operatives will get excited when an exceptionally large or well-formed stone appears on the conveyor belt! From there, the stones must be cleaned, and are often cleaved into smaller stones with better clarity, and then cut. It is only at this point that the true value of the stone will be known: some will not live up to their promise, others will be damaged during transit or while being cut, and so on.

Stands the Test of Time

Once cut and assigned a dollar value, diamond prices tend to be very stable, slowly increasing in value and thus ensuring that any investment will be worth the effort, especially if the diamond investment is thought of in terms of decades rather than months or years. While the value increases by around five percent a year, note must be made of the cost of storage, insurance, cleaning (if worn as a jewel) and so on – often these costs can eat into the return on the investment. However, if you lock your diamonds safely away, refuse insurance (a risky move as even the most secure deposit box can be burgled!) and spend nothing more on them than your initial purchase price, you will almost certainly gain on the deal.

A diamond is indeed a worthwhile investment when considered purely from the financial point of view. But they are beautiful objects, and are also worth investing in from the aesthetic point of view, to be worn and seen and sparkle in the sun!