Sauvignon Blanc originally came from France, but now it is one of the most widely planted grapes around the world. The taste of Sauvignon Blanc reflects where the wine was produced, so there is a wide range of flavours and styles available to the wine connoisseur.

The overall taste of this wine is one of fruitiness, ranging from young zesty, tangy flavours to more deeper, richer sun-ripened flavours. New Zealand’s Sauvignon Blanc wines range from the spicy, vibrant flavours of the South Island to the richer and riper flavours of the North Island.

Compared to many other countries, the production of wine in New Zealand is fairly new, being first noted in the early 1800’s. The industry took quite a while to gain a solid foothold due to a number of problems over the years.

There were issues with phylloxera, which attacked the growing grapes, a culture of prohibition to overcome and poor quality wines, due to growing the wrong vines for the climate in New Zealand.

Prohibition has had a long history in New Zealand and even in the 1950’s, wine could not be sold in restaurants or shops. The turnaround came in the 1970’s when wine growers began to look at the quality of their wine and started planting more suitable varieties for the climate – producing higher quality wines.

This was compounded by the fact that Kiwis were now travelling around the world and learning about the European culture of food and wine. This was something that was new to the Kiwis, but they quickly embraced this way of life, bring back to New Zealand a love of wine.

Since this early win in the UK, New Zealand’s Sauvignon Blanc wines have won numerous national and international awards, becoming the most planted grape in New Zealand. These wines have a very distinctive flavour, being due to the southerly climate, cooler temperatures, and their ocean breezes.

Did you know that the wineries in Central Otego on New Zealand’s South Island are the most southerly and the closest wine regions to the South Pole?

It is the cooler temperatures and the long cool growing season that helps the Kiwi Sauvignon Blanc wines develop a natural balance of acids and sugars, highlighting their distinct fruity flavours. 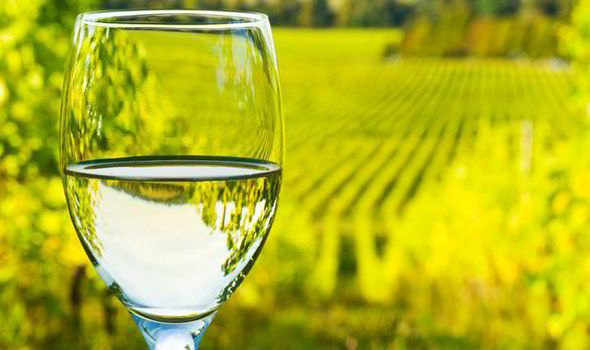 These wines are quite dry, fruity, and zesty and so pair wonderfully with all types of fish and seafood. They go particularly well with crunchy, crisp salads, tomatoes and vinegar based dressings. Sauvignon Blanc also goes really well with strong, pungent soft cheeses, as well as white meats, such as poultry, pork or turkey.

So if you are in the mood for a glass of wine this weekend – why not investigate a Sauvignon Blanc from Advintage and bring a little zest into your life?